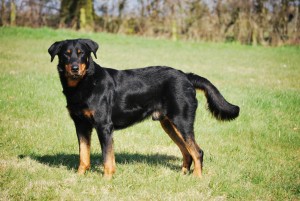 The Beauceron is a French shepherd dog dating back to the 1500’s, said to be developed solely in that country with no crosses to foreign breeds. Originating in the plains region surrounding Paris known as ‘La Beauce’. La Beauce is generally acknowledged as the cradle of the breed. The Beauceron was used as a livestock herding and guarding dog extensively on farms in France. Most often with sheep, but were also used with cattle. Their ability to follow commands without hesitation was well utilized during both wars in Europe, where the military used them on the front lines to run messages. Beaucerons were also used to pick up trails, detect mines and support commando activity. In recent years the breed has been used as police and military dogs.

THE BEAUCERON IN THE UK

Two French Beauceron were imported by Mr. Ray Greenwood to the UK on October 4th 1990. These were the male Fripon Du Plessis Saint Loup and the female Fleur Du Domaine Saint Guillaume. From the first litter which was bred in partnership with Meg Purnell-Carpenter came the male Able Seaman with Overhill owned by Meg Purnell-Carpenter. He was the first Beauceron exhibited in the UK at the National Working Breeds Championship Show on Saturday July 18th 1998. He won the Import Register Limit class. His younger sister Bell Aime Petite with Overhill won the Post Graduate class, the Judge was Mrs. Joyce Collis.

The Beauceron possesses great balance of character. It is the same throughout its life. When it has adopted a master or family, it becomes loyal and will not falter. It is bold and must be able to take responsibility for defending its family and property. Its expressions and imposing size give it the asset to challenge all intruders. It takes on any allotted task very seriously. It will not bark without good reason. It will not tolerate unfair punishment, but against that for reward, a caress (stroke) is sufficient. It will be a little clumsy in its mark of affection but, in doing so, it will be self controlled with children, suggesting great gentleness. The adult character will depend a great deal upon its period of training/education which, importantly should last until ten months of age. It must be stressed that the Beauceron is not a dog for everyone. They are probably not suitable for a first time dog owner, unless that person were prepared to seek advise and guidance from a professional trainer or someone with a lot of ‘dog experience’. The Beauceron needs a disciplined master who can take the time, and have the patience required to properly train such a dog. If not properly handled a Beauceron can become quite assertive.
A well behaved adult Beauceron is not overly hyper, however up until they are two to three years of age they can be extremely active and will require a great deal of exercise. The Beauceron does not fare well as a kennel dog, or in an apartment. They should not be left alone for long periods of time, as they often suffer from separation anxiety. If the potential owner is not prepared to spend the time and put forth the effort necessary to properly train and socialize this breed of dog, they should consider another

In the French book ‘Le Chein de Berger de la Beauce’, author Maurice Luquet writes ‘The Beauceron’s intelligence is manifested in its good and rapid comprehension of its master’s desires, and sensitivity to it’s masters moods.’ This psychic sort of bond with it’s owner is considered by some to be nonsense, but many Beauceron owners speak of it as fact. Beaucerons are noted for their excellent memory and instinct to guard all persons, property and animals of their home. 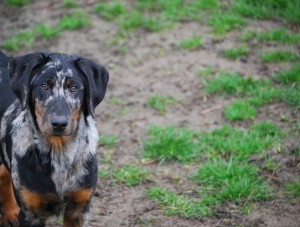 The North American Beauceron Club states that ‘They are without a doubt, one of the most intelligent breeds. The Beauceron is always ready to intervene in a situation, its stern appearance commands respect, and yet will keep calm and only intervene when necessary.’ These qualities are only surpassed by the breeds extreme sense of loyalty and its eagerness to please. Despite their foreboding appearance, Beaucerons are tolerant by nature and do well in family situations. The breed will usually not tolerate harsh physical treatment from adults. They are gentle with children and older people, and this is especially true of dogs that have grown up with children. (It must be noted that they are a large dog and even a puppy could prove to be overwhelming to a small child).

Beaucerons are sociable with other dogs they know, but are territorial and will often not tolerate an intruder. They get along well with cats if introduced at an early age. Being herding dogs, they instinctively try to herd livestock. The Beauceron is still used extensively for herding and protecting sheep and cattle. The high drive, high performance attitude of this breed serves many ranchers well with their seemingly endless energy. Many police forces throughout the world are now relying more on their canine units, and many of these previously used breeds in police K-9 work. They are used in apprehension of criminals (tracking and bite work), personal protection, narcotics detection, riot control, search and rescue, body recovery, prison security and secured escort. France’s military forces still train Beauceron as do some other countries, whose K-9 trainers have been impressed with the breed. The Beauceron is also used in highly competitive dog sports such as Schutzhund and French Ring Sport which involve obedience, protection, searching. tracking and agility. The Beauceron has a working history of close to 500 years. It is no surprise then that these dogs are at their best in a working situation. This is not to say that the breed should not be a family pet. It is to state that even the family pet will be happiest when some tasks are expected of it. Obedience training, protection training or even flyball competition will keep these dogs stimulated and vigorous